The following weekend I was able to get some time with JDV so I went over to Evans Tuning. I kept driving Bumblestook every night and timed it exactly so that I'd have exactly 500 miles on the diff when I got there.

While I was there, I had JDV take off the Motons so I could get them rebuilt.

That meant that I'd have to roll around on the stockies for a while with the nasty 4x4 stance but we were expecting snow soon anyway so I wasn't really going to drive her much anyway.

For some reason, January of 2012 was cold but still pretty dry out. No real snow to speak of so I took that opportunity to get more things done on the car. Since JDV was busy, I went to see Billman to install the new Puddymod Stage2 diff and EVS diff mount collars.
Looks like my previous diff was leaking a bit from one of the fill bolts but it was also not operating as smoothly as it should. It was probably wear from all the events the previous year.
The EVS diff mount collars stiffened things up a bit back there. You can definitely feel a slight difference when you shift. I'm not sure if I really needed this but since I was swapping diffs anyway, I figured this would be a cheap way to stiffen up the mounts without replacing them with polyurethane mounts.
Of course, since I was using an OSGiken diff, using OSGiken fluid was the way to go. In these cold temps though, it was as thick as molasses and Billman actually put it in a container (plastic one) and heated it in the microwave for a bit so it would be runny enough to get into the housing.
Puddymod gave specific instructions to run the diff for exactly 500 miles without pushing it hard then change the fluid before competing with it. Watching all this was Billman's awesome dog, Kajira. She really is one of the friendliest dogs I've ever met in my entire life but can definitely generate enough power to just crush bone :D
at December 25, 2013 No comments:

Being a super Mugen whore, when the opportunity came knocking that a Spa yellow Mugen top was for sale in trade for my OEM hardtop, I was on it like a fat kid on cake. I always loved how the Mugen top completed the lines of the S2000 but would definitely miss the nice bigger rear window of the OEM top. Fitment, as you would expect, is top notch and it made for a great early Christmas gift for myself.

In late 2011, Haltech finally released a fully plug-n-play ECU, the Pro Plug-In for the S2000. I jumped on this right away and the went to Evans Tuning to get tuned.

Aside from being fully plug-n-play it offered a lot of future potential that I would eventual take advantage of but it had more capabilities than the more expensive AEM unit.

The only power mods on the car at the time was the K&N FIPK intake, Mugen header, 70mm test pipe and Greddy SP2 cat-back. VTEC was dropped to 3600rpm and rev limit raised to 9300rpm. The gains at the top end were minor, only about 8hp and 3tq but I gained a bunch in the midrange and, as much as 23ft/lb. This was on 93 pump gas.

Nick organized a S2Ki NY Metro cruise to Bear Mountain in October of 2011. After the Evans Tuning meet, there was quite a bit of momentum to do something fun before most S2K owner would start to put their cars away for the winter. The NY guys would meet up at Bay Terrace in Queens and then we'd convoy together across the Whitestone bridge and then the George Washington bridge into Fort Lee where we'd meet up with the NJ guys. The route would take us up the palisades through Bear Mountain to the final destination of Cracker Barrel in Fishkill, NY. 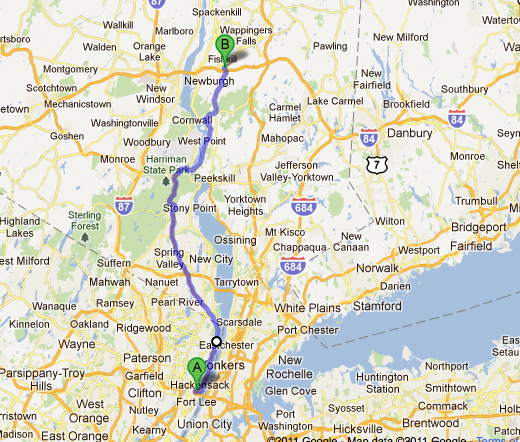 We had a great time. Everyone behaved and this time we had no problems with the police though we did have a brief escort probably just to make sure we weren't doing anything stupid. It was very cool though. We turned a lot of heads as the seemingly never ending convoy of S2Ks took over the small roads once we got there and we even stopped on the Bear Mountain bridge to take photos with everyone just giving us thumbs up as they passed us.
And of course, I had to put together a video because that's what I like to do. It's quite a bit longer than I would've done if I did it all over again but you get the idea.
S2Ki Metro NY Fall Cruise to Bear Mountain
10/16/2011
at December 10, 2013 No comments:

Ok, so I'm a Mugen whore and when I found out someone was selling a Mugen AP1 header then I jumped on it. I had a tune scheduled soon so I figured I might as well get any power adders now so I could make the most of it.

That weekend, I was back at JDV's getting it all installed.

It definitely changed the exhaust note. Got rid of the slight drone and was supposed to add power in the midrange. Hard to tell without a dyno but the car definitely felt peppier after a more free flowing exhaust setup. I have to admit thought, the thing I hate the most about having no cat is the nasty "rotten egg" smell that comes out of the tail pipe.
at December 08, 2013 No comments:

The following weekend was the Evans Tuning Meet in Phillipsburg, NJ. Most of the The NY and Northern Jersey guys met up at one of the rest stops on the Garden State Parkway. The rest of the turbo S2Ks were going to be starting from JDV's house (where most of them were built).

Once everyone showed up we started the drive down. It was a great day for an early fall cruise, the sun was shining, there was a cool breeze and we had a great turnout. We eventually ended up seeing JDV and the rest of the turbo S2Ks half way down. We were generally being good but someone went a little too fast in the front of the convoy and got pulled over. It was a good meet though and the S2000s had a strong showing.

I look with envy at all the cheap track days the west coat guys get but there's one awesome thing about being on the east coast and that's getting to drive at Watkins Glen International. Easily my favorite track, the area is beautiful (especially in the fall), the track is a huge adrenaline rush with elevation changes and walls that lure drivers in who aren't paying attention or have run out of luck or talent. I had been there before but since I arrived a day early, I figured I'd go visit Watkins Glen State Park as well. Even if you don't like going to the track, there's some pretty cool stuff to see there.

Well of course, fall at Watkins Glen means a significant chance of rain and so of course, without fail, that's what we got. 40 degree weather, intense downpour and fog.

I counted probably 8 crashes that weekend so it was no surprise a lot of people decided to wait the rain out. I, on the other hand, just accepted that I was screwed and went out there. With almost zero visibility from the spray, standing water everywhere and driving on RS3s I think this is probably the craziest thing I've ever done especially when you could barely see the brake lights of the guy in front of you let alone see the apex. Each session was a 20 minute pure butt-puckering adrenaline rush and I really don't know how I stayed off the walls, especially as the car would drift a few feet in each direction anytime I'd get on the power.

Watkins Glen in the downpour - 10/2/2011
Watkins Glen, NY
Eventually though it did stop raining on our second day there and we got some dry runs in. It wasn't completely dry as the rumble strips were still wet and very slippery so you couldn't really ride them like you normally would. With most people having gone home already, on the last session they just asked anyone who was still there to go out and have at it and while my rule of thumb is to take it easy on the last session, I did try to make the most of it since I was just so sick of being cold and wet all weekend long.

Watkins Glen - Dry - 10/2/2011
Watkins Glen, NY
And on the way back, I made my usual stop at the scenic lookout by the Delaware gap on I-80 just to enjoy the view before heading home and being glad that once again, Bumblestook was going home in one piece and on her own power.

Back to autoxing, Rad brings out his AP2 and I go back on street tires

August is always a slow time for autox in the NorthEast due to the heat so after a month it was good to be back out there again having fun. Rad had picked up his NFR AP2 by this time and was going to bring it out for the first time at the MSNE event. Why is this relevant? Because after this event Rad and I got to talking about codriving his AP2 the following season in STR.

MSNE Autocross - 9/4/2011
Meadowlands, NJ
Rad vs Steguis - 9/24/2011
Meadowlands, NJ
Since I'm absolutely horrible at adapting to new setups, I had to stop driving on Hoosiers ASAP so I wouldn't get spoiled by the grip. For the next two events it was back to street tires for me. I have to admit I missed the Hoosier grip but it was fun sliding around but as the video shows, drifting around corners is most definitely not the fast way around.

NNJR SCCA Autocross - 9/10/2011
Meadowlands, NJ
At the next NNJ PCA event, the forecast was thunderstorms but we lucked out and got dry weather. Running street tires again (the RS3s we ran at the NJ ProSolo earlier in the year) for the reason I stated above but mostly because I got tired of pulling the tire trailer across the George Washington Bridge.

I found someone on S2Ki selling an unused Puddymod Stage 2 diff with OS Giken LSD. I jumped on it but didn't install it right away. The complete spec was:
Puddymod is super detailed with his diff builds. He even includes pictures of all the tolerances and torque settings.
at December 03, 2013 No comments:

Switching to Hoosiers had a pretty bad side effect on the AP1...a lot of oil dumping out of the PCV valve during high speed sweepers as the oil would climb up the side of the engine and get siphoned into the valve from the plate underneath the valve cover from all the grip. The solution was to install a catch can but I didn't want to fork out a lot of cash so I just did a DIY from one of those Kobalt air/water separators used in air compressors at Lowe's and mounted it between the radiator fans. It was quite effective but it really highlighted the problem. I could fill that "can" in only 8 runs. I was definitely dumping oil out.

The further correct the prob, I switched to an AP2V1 (05-06) valve cover and PCV valve. Not only is this metal as opposed to plastic, it also sits horizontally so it doesn't siphon nearly as much oil out during hard cornering. Not a tough job at all and even I was able to do this myself in the garage with minimal tools.