I scheduled an appointment with Evans Tuning a month or so ago to get Bumblestook back on the dyno just to make sure she was still running right. The earliest weekend appointment I could get was today which worked out great since we've got a few weeks of downtime to get her sorted before the final countdown to Nationals. She's been running rock solid (knock on wood) for the past 2 years without issue but it was worth having Jeff put her through her paces while carefully monitoring all engine parameters. The dyno is the best and correct way to do that. The battery quick connect SJF Performance installed fixed the ground issue but on occasion we'd still hear and feel a kind of burbling sound at part throttle and sometimes even at the full throttle and she would behave like she was momentarily fuel starving. This would mostly happen in the slaloms and we knew were losing power and when this happened.
On the dyno she seemed to pull ok with the same power as before so at least we don't have any power loss but he did notice something weird when holding part throttle at higher revs, the TPS voltage would jitter a little (about 0.5%) but this was actually enough to trigger the ECU to act like the engine was just starting up and then would momentarily run rich. We probably would have not easily seen this by just looking at a datalog after the fact so it was really good that Jeff was trying to zero in on this problem while looking at everything on the ECU in real time. Jeff tweaked some of the TPS voltage sensitivity parameters in the ECU and Bumblestook immediately responded positively. The momentary rich condition is now gone and she revs smoothly through the entire power band both at part and full throttle. Unfortunately our next local event to do some final testing won't happen until August but at least the mystery "burble" issue has been addressed so expect some more pace out of Bumblestook the next time you see her out there. 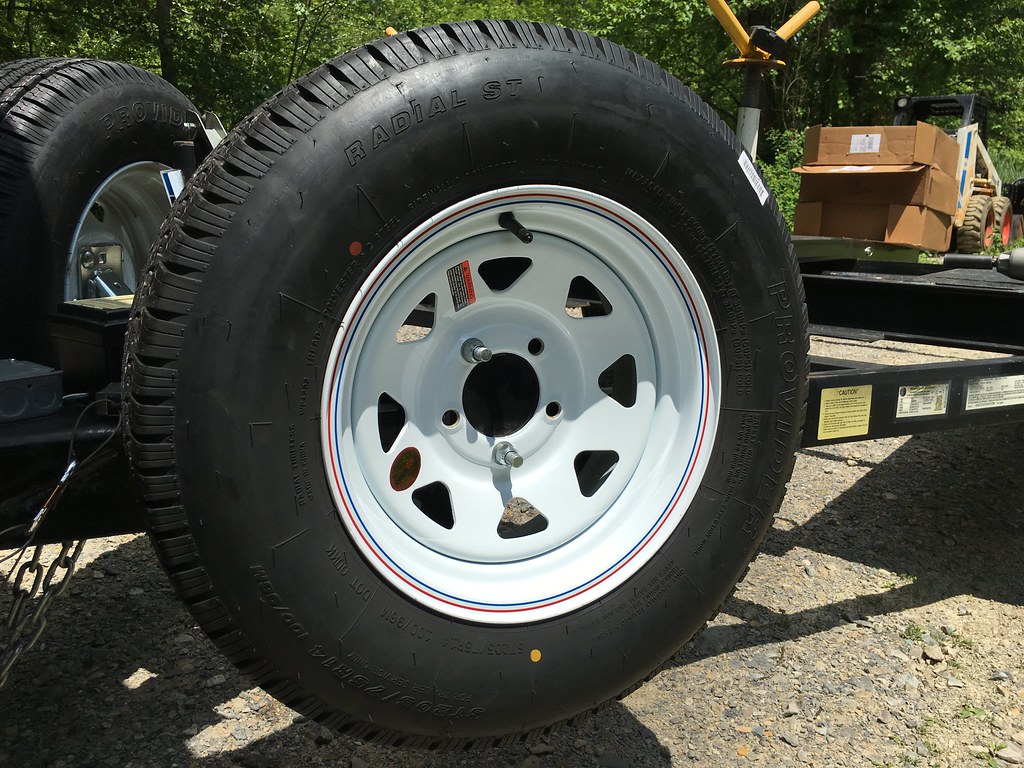 Radial trailer tires - SJF Performance - 6/25/2016
I just replaced my trailer wheels and tires before Nationals last year but after doing some more research I decided to change them yet again. I switched from bias-ply to radial trailer tires. The radials have slightly less load capacity but still well within my requirements but more importantly they are rated up to 81mph unlike the bias ply tires which are rated to 65mph. This will help greatly in Iowa when I-80 speed limits are 80mph and the last thing I want to worry about is blowing out a trailer tire. We generally try to stay below this limit but it's always good to have that extra cushion just in case. All four wheels/tires were replaced and I also got two new ones as spares. The trailer's going to be at SJF Performance for a while so he can make some nice little modifications to the trailer for me and put a fresh coat of paint and get rid of some of the rust that's started to form. The countdown to Nats has started.
at June 25, 2016 No comments:

We finished the Toledo ProSolo with another team victory, taking the top two spots in BSP. Hez took the win over me by 0.2 seconds for another close finish between us and gapping the rest of the class by 1.8 seconds.

We arrived on site early on Friday to secure our paddock spot and unload. The course that was set up for this event was designed by Alex Jones and was probably one of the best ProSolo courses I've ever driven. It was very technical and had the right balance of fast and slow sections. For our morning runs of day 1, Hez pulled off some fast runs early with me sitting a distant 2nd by a crushing 1.8 seconds. By noon, the ambient temperatures had already risen to 94F and we were baking in the sun but the good news was that the rain we had in the forecast wasn't going to happen. Unfortunately, timing problems and a few car breakages caused the morning session to drag on until 3pm. Being in the last run group there was a chance we wouldn't be able to get done with our runs that day. Miraculously, the afternoon session went on at a much more normal pace and we got our last runs in. The course was getting grippier and Hez redlit most of his afternoon runs and didn't improve on his clean run. I was able to find about half a second but was still 1.3 seconds behind Hez and only 0.1 seconds ahead of Lee in 3rd coming into day 2.

On day 2 of competition, the temperature was much more comfortable. The sun was out and temps were in the mid-70s. These were ideal conditions to go faster. Hez found another half a second and extended his lead back up to 1.8 seconds. After reviewing my videos from the day before I realized what I was doing wrong. This course required patience and I was doing everything wrong. I was trying to go too deep into the tighter sections, increasing distance and pinching myself in key spots forcing me to back off in places where I should be hard on the throttle. I also wasn't moving my head enough to spot the corner exit out of the 180 turns. I focused on looking ahead and nailing car placement for my runs. I found a good chunk of time on the left side course and got within 0.160 of Hez's fastest left side run and trailed him now by only half a second. On my final right side run, I was able to string the corners together much better and got to within 0.043 of Hez's right side run.
In the end, Hez still got me but I was happy to get out of my slump and close the gap. We had a solid 1, 2 finish, got much needed practice on concrete and more importantly, won 2 more Hoosier tires to complete the set we need for Nationals. Bumblestook survived yet another battle intact and we'll take the next few weeks to get her looked over for some much needed TLC.

We'll skip Wilmington next month and instead use those days to run the ProSolo Finale in August. Hez will be coming into the finale with 40 points, equal to the current BSP ProSolo points leader Anthony Porta in his Mazdaspeed Miata and I'm now tied with Tony Rivera in his 350Z for 2nd with 32 points so it'll come down to the finale to determine the overall ProSolo winner. It was a great weekend overall and we're looking forward to going to Lincoln, Nebraska for the ProSolo Finale and National Championship in a little over 2 months to try follow in the line of S2000s that have taken the BSP top spot in the country.