After over a 5-year hiatus from enjoying track days, I finally got the opportunity to go again in Bumblestook. Brad set up another S2K Takeover at the NY Safety Track in Jefferson, NY after the first one earlier this year went really well. I arrived there on Sunday afternoon since I'd never been to this track before and wanted to be able to get a track walk in with the guys to get some pointers.

I'm really glad I did. Despite having watched a bunch of in-car videos from other people, it wasn't until the track walk that I understood how much of an elevation change there was and how blind the corners were. It's a bit disconcerting since there's also minimal to no runoff so for this track, in particular, I'd have to be extra careful the next day.

I got back on site the next day bright and early. I did the usual things of emptying the car out and giving her a once over to make sure I wouldn't have any issues.

Coincidentally, the night before during dinner with everyone, I was chatting with Billman and he happened to have exactly one of his new generation TCTs (timing chain tensioner) with him. There's nothing wrong with my old tensioner but they do eventually go bad and it is 13 years old after all (the engine in Bumblestoook is from a 2005 S2000). Billman modifies the OEM tensioner to never be a problem so as part of buying the new TCT from him, he took care of the install which he can probably do with his eyes closed. At least I don't ever have to worry about the TCT going bad on me ever.

The track is definitely intimidating despite only being a mid-speed track (topped out at around 102mph on the straight). A lot of the corners are blind and cambered and as I mentioned earlier, the lack of runoff means you really can't just "send it". Although I'd say more than a few did and they might need to do some buffing later.

The developers of Hotlap where there as sponsors testing out some new changes to their software that allowed real-time telemetry and track position to be seen on the web or on the phone. It wasn't entirely perfect not because of the software but because a lot of us were having bad cell service up there and more important, the cloud cover wreaked havoc on our GPS units. In one instance, even my Racepak dash was confused and saying I was going 500mph.

Overall I'd say the track is a lot of fun but you really have to respect it or you might brown your pants. I'll probably go back again but exercising an equal amount of caution as I did today. I was hoping to get some good video using TrackAddict and the GoPro but the GPS issues caused all kinds of problems and all I was left with was the raw video. Thankfully due to the overcast, you can actually read my dash for once so at least there's that.

Final laps of final session - NYST - 9-17-2018
We all had a chance to do seven 20 minute sessions but I only did six and opted to leave early instead since I saw some big clouds rolling in. I'm glad I did because right after filling up the tank, I drove through a pretty decent rain shower all the way home. Hopefully, that did wonders cleaning up my wheels. The Carbotech XP10/XP8 combo was phenomenal and surprisingly really quite fine on the street. I'm now debating just leaving them on all the time instead of swapping back and forth with stock pads. The oil cooler is working great too. Didn't see temps go past 209F at any point during the day.
at September 17, 2018 No comments:

I finally got to run Kay on her home turf at the NNJR SCCA's 9th event of the season. First thing I had to get sorted was increasing the front swaybar stiffness. After thinking over how she felt at the last event I knew it has to go up a notch. Thankfully Andrew and Tamra were kind enough to let me use their trailer so I could more easily get to the endlinks. I increased the bar stiffness from 3/5 to 4/5.

I then opted to run higher rear pressures this event with a target of 31psi front and 33psi rear. I took one run to get used to the course and by the 2nd run I was able to get a nice lead in the class. She felt very predictable and no longer super pushy. I could chuck her into a corner then use the throttle to make her rotate and in subsequent runs where I tried to test her limits, when she gets sideways it's beyond easy to reign her back in.

After morning runs I was able to keep her in the lead but my first two runs in the afternoon yielded no improvement and I dropped back into 2nd place. Before the final run, Mark Valera came over to remind me to cut my distance. It's such a fundamental thing but even after all these years I sometimes forget to focus on it. By doing so on the final run I was able to retake the lead taking her first win.

It's a local event so while I was happy for the win, I was even happier that I'm slowly figuring out how to drive her properly. If you watch the video you can see I've still got quite a bit of distance to the cones. I guess unlike Bumblestook, I'm not quite certain of where her corners are. The good news is that there was plenty more time to be had out there so I'm really excited to keep improving and finding more pace as we continue to progress together.

Of course, my GoPro 5 Hero Session continues to give me audio issues. Despite hooking up an external mic it recorded nothing so the video will have make do with the external window video.
at September 15, 2018 No comments:

With just a little over a week left before the S2K Take Over Round 2 at NYST, I had to get cracking on getting Bumblestook track ready.

Everything's been running pretty smoothly so the only real prep left were the brakes. I opted to go with Carbotech XP10 up front and Carbotech XP8 in the rear.
They offer great brake performance for running street tires on track and I paired them up with a fresh set of Centric cryo-treated rotors.
To further help with brake cooling, I finally connected the bumper brake duct inlets to the brake rotor shield. This should greatly help reduce the chances of cracked rotors.
As the last bit of safety enhancement, I also picked up an Element E50 fire extinguisher and mounted it in front of the passenger side seat. Hopefully, I never have to use this but something is better than nothing in case of an emergency. 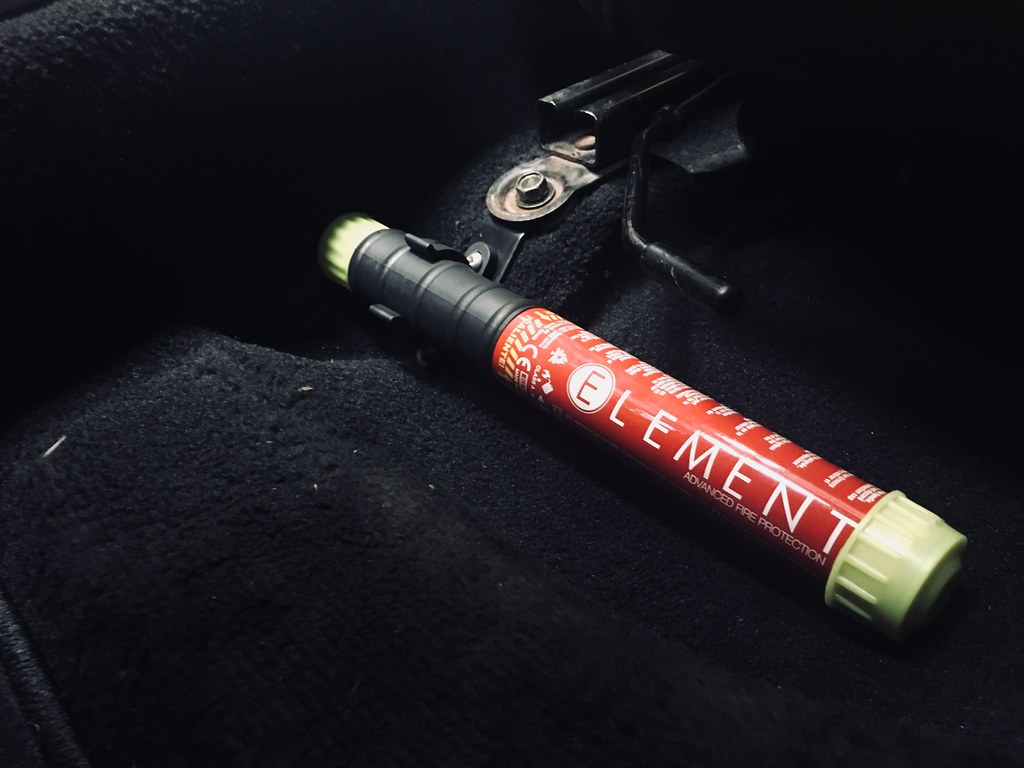 If you haven't seen this thing in action it's pretty cool and I think I might have to get one of these for each of my cars and apartment.

I dropped Kay off with PeeJ Auto Detailing last weekend to get a similar treatment as Bumblestook minus the engine bay since it was already fairly clean and well, it's hidden from view anyway. My main objective was to get her corrected, polished and ceramic coated to make it easier to keep clean. Dark cars are the worst when it comes to this even when they're not black (remember, Kay is Atlas Gray).

He then spent a few days correcting and polishing. There were quite a few swirls on the car and some microscratches that needed to be taken care of. 1st stage paint correction was compounding using Jescar correcting compound. 2nd stage paint correction was polishing using Sonax perfect finish. She was then wiped down with Optimum paint prep to remove any leftover oils from the polishes.

Once that was done, 2 layers of Optimum Gloss Coat ceramic coating and the results are once again astounding.

Obviously, he also cleaned up the interior which wasn't in bad shape to begin with anyway but noting it here for completeness. She was deep cleaned with leather master's strong cleaner and protected with Optimum leather protectant.

About eight months went by since I ordered the Mugen Aero Bonnet. It got fabricated, then shipped from Japan and arrived here a few weeks ago but I only had time to actually put it on today. The fitment, finish, and quality is next to none. It weighs a scant 10lbs and is designed to keep engine temps down which I was able to verify on the drive back. Bumblestook has her original color scheme back. Might not be everyone's cup of tea but I love it and that's really all that matters.

The hood was all packaged up very nicely which is nice since I was able to reuse the box to store my OEM hood for the future if I ever decide to put it back on (yea right haha).

It was a pretty straightforward swap but I did have to raise the hood latch up in order for the hood to lock properly. I don't even know if photos do the hood justice but the dry carbon 1x1 weave is gorgeous.

Unlike the replicas out there, Mugen thought of everything including adding rain channels to redirect the water if it rains despite the scoops being open.


I was in Tokyo earlier this year and picked up a really nice model of a yellow Mugen S2000. I'd say that's pretty close now.


Big thanks to Alex for giving me an extra set of hands to get the hood on today. We figured we'd do a quick photoshoot of our cars while we were at it.

Once we get back from the track in a few weeks, she'll go back to PeeJ so the hood can get ceramic coated as well. I think I'm going to leave it unpainted at this point. The weave just looks too good to be hidden under paint.
at September 02, 2018 No comments: